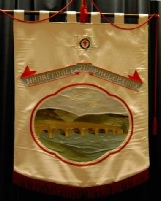 Meetings held at 6.30 pm on the second Tuesday in

March (Installation), May, September and November

Following the First World War, freemasonry in general saw a surge in membership as in the next three years some 350 new Lodges were formed. “In many cases the founders were servicemen who wanted to continue the camaraderie they had built up during their war service, and were looking for a calm centre in a greatly changed, and changing world” (per UGLE website).

This obviously led to a similar surge in the other Orders, including Knight Templar Preceptories. Whilst there were just 201 Preceptories at the start of the Great War, in the years following West Yorkshire were particularly active in forming new Preceptories, with 4 in the Province between 1918 and 1920 (Integrity, De Ros, Chantry and Wharfedale).

Otley is well placed, north of Leeds between Harrogate, Bradford and Keighley to serve masonry for many Craft and Royal Arch masons. Meeting at Westbourne House, with excellent catering facilities though fortunately – or perhaps unfortunately, we no longer face the daunting menu of our inaugural meeting which started with Halibut, followed by Jugged Hare, then Roast Beef as main course with sweet and cheeses to finish. These days, a modest 2 courses plus cheese for a tenner suits our current lifestyle (and wives demand to watch our weight).

An active, friendly membership of regular members, it cannot be denied that we now have more retired than working members (though with increased life expectancy, this is no bar to decades rather than years of active recreation following retirement). Preceptory numbers average 20 in the 21st Century, and though three of our members have received their 40th certificates, we must point out that they did join in their youth. E.Kts. Michael Jones, Les Beanland and Robin Gregson remain in Office and are regular attenders.

We do not have any earth shattering ceremonies planned before our Centenary in 2020, but are always ready to welcome visitors at our meetings, as listed in the Calendar and Handbook (and on this website).