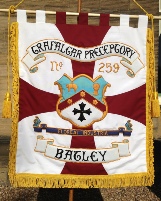 Meetings held at 6.45 pm on the second Monday in February,

Batley 1,000 Years ago.
Batley was a place of some antiquity even before the Order of the Temple was founded at Jerusalem over 850 years ago.
A thousand years since it had its own Church and was regarded as a prosperous parish. Picturesquely situated, it certainly was, then, surrounded by magnificent woodlands.
William the Conqueror treated it more kindly than some other parts of Yorkshire and fell so much in love with it that he claimed it as his own property and, after the Conquest, made a present of the whole parish to one of the most powerful of his Norman Barons, Ilbert de Laci.
The First Crusade, which was organised in 1096, commenced about that time and, we are told, no fewer than 600,000 soldiers enrolled themselves under the Banner of the Cross.

Three Local Crusaders at the Siege of Acre.
It is not clear whether Batley was represented in that mighty army, but three Crusaders who took part in the Siege of Acre from 1189 to 1191, including the great Roger de Laci himself, have been traced back to this neighbourhood.
This Valiant Knight was a descendant of Ilbert, who, thanks to William the Conqueror, owned the very ground on which the Trafalgar Preceptory No.259 holds its meetings.
Roger de Laci had a companion, William de Bellemont, or Beaumont, and when they returned from the Holy Land, de Laci presented to his friend, for his homage and service, Whitley Woods, near Huddersfield, on which now stands Whitley Hall, the seat for many centuries of the Beaumont family.

A Brave Man and a Great Fighter.
The famous Beaumont MS containing old Masonic Charges, was found at Whitley Hall. There is other evidence that in addition to William Beaumont, his brother Robert Fitz-Parnel de Beaumont, fought in the Third Crusade under the Master of the Knights Templar.
This old Manuscript says:
Robert was a brave man and a good fighter. It was the general report of that time that age had not seen so many exploits performed by so little a man as he was, for he was but of small stature, compared with most Warriors of the Cross. At the Siege of Acre he and the Bishop of Salisbury led the English through a break in the walls on June 8th, 1191.
They were not able to make good their defence and the breach was surrendered on July 12th.
The fact that the Whitley estates were given to the ancestor of the Beaumont family by Roger de Laci, gives rise to the thought that Whitley was probably included with the parish of Batley in the gift made to Ilbert de Laci, for that present embraced also Wapentake of Morley and lands extended through Leeds as far as Woodhouse Moor, which is further away from Batley than Whitley.

The Manor of Batley.
After these discoveries, one is not surprised that one of the 28,000 Manors held by the Knight Templars and the Knights Hospitaller was the Manor of Batley, extending as far as Halifax, and that until 210 or 220 years ago Court Leets were held in the Fleece Inn, Batley, only 200 yards from the Town Hall, to enquire whether a Cross was being maintained on houses in the Manor which had been given for the benefit of the Crusaders centuries before.
Fines were imposed upon the defaulters.
The Court also called for the wills and inventories of people who had died “under the Cross.”
The accounts of these Court proceedings must make most excellent reading.
It is hoped that evidence that, in addition to the Preceptory of Newlands, near Normanton, there was a Commandery in this locality, for in Birstall Parish Church, only a couple of miles from Batley, there are three Knights’ tombstones and several ancient pew doors on which the Templars Cross is carved.
Unfortunately the Church records throw no light upon these relics, but they are believed to date back to the 13th century, about the time Roger de Lascelles – our Most Eminent and Supreme Past Pro Grand Master’s ancestor – was called to Parliament as Baron.

A Former Vicar of Birstall Master of the Temple.
One finds it difficult to understand how these Knights came to find a burial there unless a Commandery did exist in this immediate neighbourhood, and that thought was sufficient for one of our predecessors to search for further light upon that point, especially as he found abundant evidence that a Vicar of the Church in which these tombstones still rest was ‘MASTER OF THE TEMPLE’.
From documents stored in the Bodleian Library and also from Records of the Temple itself, it can be definitely asserted that William Ermystede, or Armitstead, held the living of Birstall from 1538 to 1557 or 1558, and founded the National School there and a school at Giggleswick, of which district he was a native.

Held in High Favour by the King.
This Eminent Knight was held in high favour by the King, through whose influence he is believed to have been appointed Master about 1539, and when Henry the Eighth dissolved the Order of the Temple he directed that this Vicar of our neighbouring parish should retain his office of Master, with certain emoluments.
Queen Mary also made him one of her Chaplains and added a Canonry of Windsor to his other preferments. He died three weeks before the Queen herself – two years after resigning the living of Birstall.

DISCUSSIONS LEADING TO THE FORMATION OF TRAFALGAR PRECEPTORY
Probably no other Preceptory ever originated in so peculiar manner. It arose, not through a request for a Preceptory, but for a Holy Royal Arch Chapter to be attached to Trafalgar Lodge.
It so happened that W. Bro. Richard Gill, who was Worshipful Deputy Provincial Grand Master, was also the Most Excellent Grand Superintendent – also the Very Eminent Provincial Prior.
He, with his long experience in Masonry, advised the deputation who went to see him, that a town of Batley’s size with four Craft Lodges and two Royal Arch Chapters could not maintain another Chapter, but suggested that four Lodges and two Chapters could maintain a Preceptory of Knights Templar.
At that time there were only five members of the Order residing in Batley, and as there were Preceptories in Dewsbury, Morley and Heckmondwike, it was not very surprising that the advice of the Very Eminent Prior was received with some misgiving.
But that misgiving never entered the minds of the five Knights Templar who were members of Trafalgar Lodge and their enthusiasm was so infectious that the Eminent Knight Samuel Standring mentioned the matter at a meeting of the Past Masters of Trafalgar Lodge, but the idea did not receive much support.
At a later meeting, Eminent Knight Samuel Standring suggested that if Trafalgar Lodge let pass the opportunity of forming a Preceptory, the brethren might regret doing so in years to come, as no doubt a Preceptory would be formed at one of the other Lodges in Batley. He also suggested that a Preceptory would help to promote harmony and lead to a closer relationship between the members of the four Lodges and two Chapters.
The Worshipful Master of Trafalgar Lodge, W. Bro. Hubert Popplewell agreed to call a meeting of the Lodge which was held on March 13th 1929, when 26 members attended. W. Bro. Popplewell explained the object of the meeting and after an hour’s discussion it was decided that, subject to the approval of the Very Eminent Prior and the granting of the use of the Lodge premises, a Preceptory be formed.

THE FOUNDERS OF TRAFALGAR PRECEPTORY

44, Wakefield, Dewsbury, a Past Preceptor of Amphibious Preceptory No.158, Heckmondwike.

Holling Royd, Dewsbury, P.P.Warden of Regalia, a Past Preceptor of Hope Preceptory No.4 Huddersfield.

Ivy Bank, Batley, a member of Amphibious Preceptory No.158, Heckmondwike

Hazel Grove, Batley, a member of Amphibious Preceptory No.158. Heckmondwike.

Springfield, Liversedge, PP.2nd Constable, a Past Preceptor of Amphibious Preceptory No.158, Heckmondwike.

Thornhill, Dewsbury, a member of Hope Preceptory No.4, Huddersfield.

THE CONSECRATION
The Consecration was arranged and took place at the Masonic Hall, St. James Street , Batley on September 25th, 1929. The consecrating Officer was Very Eminent Knight Richard Gill, J.P., Past Constable, Provincial Prior of West Yorkshire, assisted by :-

THE FIRST CANDIDATES
The first regular meeting of the Preceptory took place on November 11th 1929, at the Masonic Hall St. James Street, Batley, when Companion Hubert Popplewell, Worshipful Master of Trafalgar Lodge No.971 was installed as the first Candidate in recognition of his great work in helping towards the formation of the Preceptory. At the same meeting, Companion W. H. Watson was also installed a member.
A very busy time followed and in the first full year of the life of the Preceptory, 13 Companions were installed as Knights of the Order of the Temple. This was achieved by holding a number of Emergency meetings during that year.
It was not until April 5th 1937 that the first full Priory of the Order of Malta was held. On that occasion E. Kt. the Reverend Henry Telford Hayman became the first Kt. of Trafalgar Preceptory to be installed as a Knight of the Ancient and Masonic Order of St. John of Jerusalem, Palestine, Rhodes and Malta. At this same meeting, 14 other Kts, were Installed as Knights of Malta also.