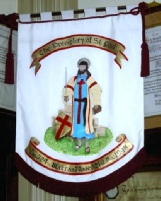 Meetings held at 6.30 pm on the fourth Wednesday in

April (Installation) & September and the first

For some years it had been the opinion of many keen, ardent Knight Templars that, with the rapid growth of Masonry, the increasing numbers of candidates keen to range themselves under its Banner as Soldiers of the Cross, meant there was ample room for a second Preceptory in the City of Bradford.

Leeds and Halifax could boast of two Preceptories each and with the surrounding Preceptories at Keighley, Haworth, Shipley, Otley and Pudsey well-staffed and in a good state of prosperity, it was felt that the time was fairly opportune for a new Preceptory to be formed in Bradford itself.  With this object in view two Past Preceptors, E.Kt. H. A. Roberts, P.P.Herald (Faith, No. 13) and E.Kt. William H. Wilkinson, (Plains of Mamre, No. 89 at Haworth) joined hands in August,1948.

It was mutually agreed that tactful feelers should be put out to ascertain the reactions to such a step and whether the project would be amicably received by all concerned.  The Past Preceptors of Faith Preceptory, No.13, who had, in point of fact, previously considered this move, gave their immediate support whereupon the project was referred to E.Kt. Edward Smith, P.Gt.Herald, the Sub-Prior of West Yorkshire, who in turn consulted and conferred with V.E.Kt. Sir David W. Smith, JP, K.C.T., the Provincial Prior of West Yorkshire.  His blessing was given, providing a good team of reliable Founders could be secured to sign the petition.

Preparations were immediately made to hold an inaugural meeting at Freemasons’ Hall, Bradford (Connaught Rooms), on Friday, 1st October, 1948, at which six Past Preceptors and twelve Brother Knights were present.  The Chair was taken by E.Kt. H. A. Roberts, P.P.Herald, supported by the Sub-Prior of West Yorkshire, E.Kt. Edward Smith, P.Gt.Herald.  E.Kt. H. A. Roberts was unanimously elected Eminent Preceptor Designate.  The Officers were proposed and it was agreed that the project should go ahead.

At a further meeting on the 13th October, the Eminent Preceptor Designate indicated that the Past Preceptors of Faith Preceptory were willing to loan their equipment and assist in every way.  The petition was signed by the Founders, an enthusiastic, keen and united band of eighteen Brethren, who received and dealt with all preliminary business with unanimity and acclamation characteristic of Knight Templary.

The name of the new Preceptory presented a problem but, although several were considered, that of St Paul, suggested by the Sub-Prior, E.Kt. Edward Smith, P.Gt.Herald, was unanimously approved.  Meetings continued with the same enthusiastic spirit permeating each meeting and great satisfaction greeted the news that the Warrant had been granted by the Great Priory with the date 21st December, 1948.

The spirit of Brotherhood, enthusiasm and unity which permeated all the Founders meetings augured well for the future success of the Preceptory.  It is said that the Consecration date was awaited with no little anticipation, eagerness, keenness and some impatience but 30th March, 1949, soon arrived and it proved to be the “piece de resistance”.  The following was recorded at the time – “It is a dull day but bright, keen, impatient and eager Founders await the Consecration Ceremony with all its splendour and richness of ritual and true Christianity – after that we shall go forward united from strength to strength. May this spirit encourage our successors; may they by only that spirit carry the Banner of St Paul Preceptory, No.324, in the years to come.”