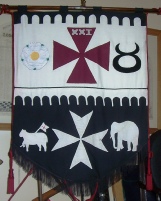 Thursday in March (Inst.), May, September and November.

A Brief History of Salamanca Preceptory, No. 21

given at the Celebratory meeting held 18th June, 2015, Southwood, Halifax

This Preceptory held its first meeting under the authority of its Dispensation on 9th February 1815. Since that time the Dispensation has never been, to the best of our knowledge, rescinded, revoked, recalled, suspended or cancelled, and therefore our connection to Great Priory since our formation in 1815 is unbroken – and we proudly celebrate this milestone of 200 years.

The ‘first awakening’ leading to this celebration came when I was sitting at the festive board whilst attending the Bi-Centenary celebrations of Prince Edward Preceptory No.18 at the Masonic Hall Rochdale. The Very High and Right Eminent Great Seneschal, Malcolm Ernest Slater, was addressing the assembled Knights and said words to the effect, ‘… and you will soon have another celebration in your Province as Salamanca Preceptory No.21 will attain its Bi Centenary in 2015 …..’

This led to an investigation of our missing 40 years, and the results of this investigation are presented in a booklet that you will each receive when we retire to the dining room after the meeting,

My remit at this time is a brief resume of the Preceptory’s history, which I am now convinced reaches back further into time than our Dispensation of 1815. I freely admit I am here descending into the realms of speculation, something I have criticised in others, and I have no concrete evidence of any kind.

Firstly, it must be accepted that some form of Masonic meetings involving various Degrees or Orders, their proceedings unrecorded, must have been taking place before our predecessors decided to ‘regularise’ their activities.

Perhaps the ‘military connection’ linking troops garrisoned in the town of Halifax and their involvement with the Lodge of Probity, as speculated by others, may have had a strong influence here, but I present these thoughts for your consideration :

( History of the Lodge of Probity No. 61 by Herbert Crossley, Published 1888 , which can be viewed online here )

1765 the Chapter of Sincerity was formed on 9th January

1791 The Chapter of Sincerity was resuscitated in February 1791

1789 The Lodge of Harmony was formed 12th November

1792 Perseverance Chapter was opened by the Lodge of Harmony

1796 The Loyal Halifax Lodge was formed

1813  Union of the Grand Lodges of England

Crossley states that the first ‘organised’ Knight Templar activities in Halifax commenced in 1788, in connection with the Chapter of Sincerity, but no records of this body exist. He also points out that the Lodges, Chapters and Preceptories that were formed around that time were strictly aligned, and though relationships were convivial, boundaries were not crossed. Members of the Lodge of Probity joined the Chapter of Sincerity and the ‘Salamanca’ Encampment. Harmony members joined Perseverance Chapter and Hope Encampment (and the latter ‘connected’ three all moved from Halifax to Huddersfield in the 1830 / 40’s)

There is a question mark about the use of the name Salamanca in 1788 which is discussed in the booklet. However, it is certainly possible that unrecorded meetings of the earlier 1788 Encampment were taking place through much of this time on an ‘ad hoc’ basis, as speculated by E.Kt John Bamford in his history of the Preceptory (see the booklet) and I now draw your attention to the wording of our Dispensation:

‘That whereas a Petition has been presented to us on behalf of Companions John Holdsworth. James Hall and James Royston, and other Com­panions of the Order having Permission to Convoke an Encampment at Halifax in the County of York …….’

‘…. and requesting Us in the Name of the Grand Conclave of England to Issue our Regular Warrant of Constitution to them for that purpose.’

This seems to suggest that the Companions concerned had already gained permission to ‘Convoke an Encampment’, and were requesting a Warrant to ‘ratify’ their arrangement.

Could this request to regularise working at this time be a result of the Union of the Antient and Modern Grand Lodges of England in 1813? The Lodge of Probity formed a Lodge of Promulgation to disseminate ‘good practice and common ritual’ throughout surrounding Lodges at this time, and our chief petitioner, John Holdsworth, was active in this Lodge and of the small number delegated by the Lodge of Probity to travel to London to receive correct instruction.

Certainly the first meeting of this Preceptory under the Dispensation did not have, I feel, the ‘razzmatazz’ of a newly formed Preceptory!  In 1815 the consecration meeting was held 9th February with eight members and two visitors present and was followed eighteen days later by a meeting on 27th February. The next meeting was not held until 11th December 1818 and the final meeting before absence of records was 28th March 1820 at which six Knights attended.

This does not suggest a new and energetic, enthusiastic or well organised foray into Knights Templary! And certainly does not comply with the By-Laws the members had accepted.

I am tempted to believe that this reflects the continuation of an irregular arrangement that had already been in place for a number of years, even from 1788, but, as already stated, I have no evidence to back up these thoughts!

And so into our ‘missing’ years, the subject of the booklet you are to receive shortly, and which you can read at your leisure.

As you will see, the missing 40 years are as a ‘black hole’ in our history and I will not dwell on that further here, however, the resumption of records in 1860 do bear a quick mention! And seem to resonate with events in 1815!

The minutes of the ‘first’ meeting held 21st December 1860 in private rooms belonging to Thomas Perkinton – not yet a member – at No.2 Westgate, Halifax, record only five in attendance with John Greenwood as Eminent Commander, Richard Reed Nelson as 1st Constable and Isaac Booth as 2nd Constable. Note, there is no record of Registrar or Treasurer!

‘… new books required for the proper business of the Encampment be provided forthwith.’

Is followed by the ‘unanimous’ election of Kt. R R Nelson (our new Provincial Sub Prior!) as E.C. and:

‘…. having been previously Installed as Eminent Commander he was formally placed in the Chair’.

He then appointed and invested Officers, with Kt. Isaac Booth as 1st Constable. After the other Officers had been installed, the new E.C. then appointed Kt. Isaac Booth Registrar and Treasurer pro tem!  The final business of the meeting was the proposal, as Candidates, of the aforementioned Thomas Perkinton, along with John Fisher and James Fisher.

At the next meeting, 26th January 1861, these three Companions were Installed as Knights of the Order. Kt. James Fisher was then appointed Captain of Lines, Kt. Thomas Perkinton as Registrar and Kt. John Fisher was proposed, balloted for, elected and appointed Treasurer.

At the next meeting held on 23rd February 1861, Kt. John Fisher, Treasurer and Kt. Thomas Perkinton, Registrar, signed and received their Certificates

This information, might lead one to conclude that the above activities were ‘in line’ with the Preceptory being re-formed. However there is further evidence to take into account before conclusions are drawn!

The Provincial Priory of Yorkshire was formally inaugurated on 22nd February 1860, well before the resumption of minutes in December 1860, and planning, preparations and decision making must have been taking place well in advance of this date. Salamanca Preceptory is on record as one of the six founding Preceptories of the Province, Kt. Richard Reed Nelson becoming the first Provincial Sub Prior, and other Knights of Salamanca Preceptory were on record as being in attendance and assisting at the meeting. I would suggest, therefore, that activities during 1860 and following are more likely indicative of a Preceptory that had been meeting on an irregular or haphazard basis being ‘take in hand’ and set back on a proper course by a few committed Knights, probably by the impetus of the formation of Provincial Priory.

It is also interesting to note that our Centenary Warrant records ‘continuous working’ commencing 22nd February 1860, the date of formation of Provincial Priory and not of the first minuted meeting of 21st December. Dare I suggest that by this, Great Priory acknowledge that the Preceptory was ‘working’ before the resumption of minutes in December 1860!

Moving on, after the turn of the Century and particularly following the Great War, membership grew steadily. In 1920 the decision was made to form a Priory of Malta attached to the Preceptory. Previously Knights of Salamanca Preceptory had joined the Priory attached to Faith Preceptory No.13 in Bradford. The first meeting of the new Priory was held 9th September 1920 with 31 founder members. At this meeting 13 Candidates were duly elected, received the Mediterranean Pass and were Installed Knights of Malta!

Bro. Kts, there is one more aspect of our History that I must make mention.

It was resolved on 6th December 1924 that in view of the large number of members, that a new Preceptory be formed, and in due time Temple Preceptory No. 235 received it’s Warrant in 1925, meeting in the same rooms at the Masonic Hall, St John’s Place, Halifax, where the two Preceptories existed harmoniously for many years. However, in 1990 with the upheaval due to the hasty move to new premises here at Southwood, Temple Preceptory made the decision to move to Barnsley. How fortuitous the Knights of Salamanca Preceptory took this step as E.Kt. Frank Johnston found a Knight Templar home in Temple Preceptory on his return to ‘God’s own Country’ of Yorkshire, and in due time in 2010 became my successor as Provincial Marshal for this Province!

I conclude with the same message I wrote for the booklet:

It has been a most interesting exercise researching into the past times of the Preceptory, but the task has been made so much harder by earlier documents and research materials being unavailable, The results of considerable time and effort put in by many members in times past have been lost and much valuable information is gone forever, and much, as a result, has become a matter of speculation and conjecture. This detailed information can never be recovered, and points to the necessity of keeping our history secure. It also points to the need for all those holding Office as Registrar, Scribe or Secretary to consider the wider view when recording minutes and record more than just the dogma of the ceremonial. It is the interaction of our Preceptories and Lodges with the world at large and the richness of its members that makes for interesting history!

We, the members of Salamanca No. 21 at this time, have a great affection for this Preceptory and look with confidence to the future. I suspect that due to the passage of time and the scarcity of resource information we will never discover the true facts to complete our missing forty years, but who knows, those able to attend our Bi-Centenary in 2060 may well be in for a surprise!

We wish the Preceptory and our successors well!