Bohemond has spent the last month reading in the garden and has swapped historical study for Historical ‘ faction’ in this fast moving novel about the lost secrets of the Templars. The book begins at the siege of Acre in 1291 and as the city burns under the furious  onslaught by the Sultan’s men, the Falcon Temple sets sail carrying a small band of Knights and a mysterious chest entrusted to them by the Grand Master. The ship vanishes without trace! The scene shifts to present-day New York as four horsemen dressed as Templar’s storm the  Metropolitan Museum at the start of a Vatican exhibition and in a bloody and brutal attack  steal an arcane medieval decoder.  An FBI agent and an archaeologist become involved in a deadly game with mysterious guardians and ruthless killers who are all engaged in chasing down a centuries-old mystery. The action is incessant, the characters round and real and             the historical basis for the plot entirely believable and close to known facts. The conclusion and epilogue provide       a fascinating theory into what happened to the Grand Master’s chest and its contents. A superb read – well worth spending sunny afternoons absorbed in this fabulously exciting tale of the Templars

View all reviews by admin → 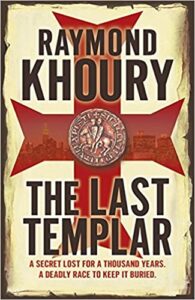 Category: Book Reviews
Author: Raymond Khoury
Publisher: Orion
A secret lost for a thousand years. A deadly race to keep it buried... 1291 AD, Acre. As the city burns under the onslaught of the Sultan's men, the Falcon Temple sets sail, carrying a small band of knights and a mysterious chest entrusted to them by the Order's Grand Master. But the ship vanishes without a trace... Present day New York. At the Metropolitan Museum, four horsemen dressed as Knights Templar storm the gala…