As many amateur historians know, medieval society was divided into three basic groups:

In other words,  those who pray, those who fight, and those who work. Put another way; church, military, and everything else. In an unprecedented change on the social order, the Templars became simultaneously the church and the military — knight-monks — taking monastic vows, praying the daily round of offices, but training relentlessly for war, and riding into battle when the call came.

As their prominence grew thy even embraced the financing of the third and labouring group.

It was this creativity and innovation that built one of the most successful and fascinating organisations of the middle ages.

According to legend and historical tradition, the Order of Knights Templar was founded in 1118 to protect pilgrims heading for Jerusalem and the Christian Holy places, where the small band of warrior monks established a headquarters. There is also ample evidence that the leader of the First Crusade, Godfrey de Bouillon had already formed a group of crusading knights to protect pilgrims to the Christian shrines as early as 1099.

By the year 1118 AD King Baldwin II granted the newly established Templars quarters on the Temple Mount and it was this association that forms a clear link to the Royal Arch and its association with the second Temple. 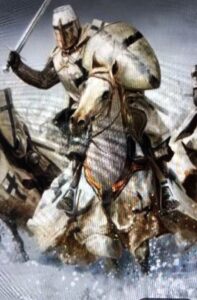 Some of these serjeants trained as Templar infantry or auxiliary cavalry, but most lived in commanderies across Europe, recruiting, forging weapons, breeding battle-horses and raising much needed money. They were distinguished from the Templars’  by wearing their blood-red cross tunics with black or brown cloaks.

The order, being a Christian one also retained ordained priests, who celebrated masses and administered the sacraments for the Templar brethren worldwide.

The triumphs and failures of the Templars are the stuff of legend. They were Richard the Lionheart’s right-hand men. Their heroism at the Crusaders’ final stand at Acre — when all other military orders had fled — is immortal. But there were also failures. The catastrophic Battle of Hattin brought about by arrogance lost Jerusalem to the also legendary Salah al-Din (Saladin). The Templars had been nurturing a growing sense of elitism which drew them ever further from their original ideal of humility and service to Pilgrims and their Lord.

The loss of Acre in 1291 saw the Templars largely withdraw from the Holy Land although that was not the end of their history or Influence.

The mysterious disappearance of the Templar Fleet; the appearance of Templar influences in Scotland and Spain. The establishment of Templar Style government in the Cantons of Switzeland and the evr unfolding mysteries surrounding Oak Island in north America give the fascinated student of the Templars much fresh research to become involved in.

Whatever your reason for being interested in the Templars you will find many happy hours of intrigue await you in the Masonic Order that bears their name!