Most Chapter Masons don’t realise the close links that exist between the Holy Royal Arch and the Knights Templar degree.

In the USA the earliest written record of the link between Chapter Masons and Templar Knights was in the records of St Andrews Royal Arch Chapter on 28th August 1769 when one William Davis was ‘Accepted and Accordingly’ made by receiving the four steps – That of Excellent, Super Excellent, Royal Arch and Knight Templar; thereby becoming the first Knight Templar initiated in the USA, the ceremony being undertaken under the auspices of the Grand Lodge of Ireland. This link between the Holy Royal Arch and Knight Templar Masonry exists in the USA to this day.

In the UK, whilst the earliest reference to modern Masonic Knight Templar activity in England can be found in the minutes of the Chapter of Friendship (Royal Arch) in Portsmouth, dated 1778, the Grand Lodge of York, from about the same time, practiced ceremonies that included a journey from the Craft on to the 4th degree (Royal Arch) and then the 5th degree (Knights Templar). This connection was clear to them and highly cherished. Since one could only be admitted to the Knight Templar degree by first passing through the Royal Arch it was natural that there should be such a link which is referred to in the words addressed to our Knight-candidate before they are admitted to their initiation ceremony.

So popular did this link become that in 1791 a Grand Knights Templar Conclave was formed comprising seven ‘Encampments’ with Thomas Dunckerley as Grand Master.

There is a further link but more subtle and again needs to be understood from how things were in the past. It was in the Royal Arch ceremony in the UK, at least until 1836, that the Mason was introduced to the Masonic Word that was a shared, three-part revelation of the true name of God. It was this secret which then ensured that the candidate for the next step of Knight Templar was in possession of the Trinitarian name of God which was required of everyone seeking knighthood.

There was no other way of guaranteeing this in the Masonic fraternity and that is why possession of the Royal Arch secrets was then so essential. That we have continued to make this requirement is a sign of tradition for clearly the basis of the Holy Royal Arch is no longer a purely Christian one.

There is however, one more continuing reason why the two grades of Masonic progress should be specialty related. The Royal Arch relates to a period of history when an attempt was made to re-establish the Temple in the Holy City and to enable pilgrims to gather there for their dutiful worship. The pilgrim Psalms alone testify to this longing in the heart of the people of Zion.

It is no coincidence that in our Masonic Knight Templar ceremony today we use the words of Psalm 122, a quote from the King James version

“I was glad when they said unto me, let us go into the house of the Lord”

That Psalm was specially chosen by St. Bernard of Clairvaux for the use of the knights who were to be the protectors of pilgrims in the Holy Land and we have wisely retained its place in our ceremonies.

The Knights Templar were, by reason of their history closely linked with the restoration of the Holy City and its sacred places to the use of the people of the new Zion. There is thus an added reason for seeing a close connection between the story of the Sojourner-candidate and the Knight-Pilgrim on his travels. It may not be one that is immediately obvious but to help Chapter Masons make the next step on their Masonic journey into the Templar Degree it is important to open our eyes to truths which might easily evade us.

The link between the Royal Arch and Knights Templar therefore is not one that can too lightly be removed and, indeed, is one that we should all memorise and use to explain to Royal Arch Masons why they should fulfil the next step of their Masonic journey by joining the Knights Templar degree.

Confident in the knowledge of these profound links between the two Orders we have confidence in inviting Royal Arch Masons to join our Order. 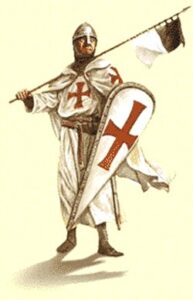 A knight of the Medieval Templar Order