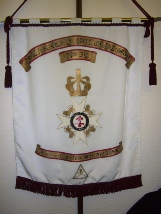 Meetings held at 6.30 pm on the Thursday after alternate

Taken from the Address given at the 150 Years Celebration Evening in October, 2009

Early in 1859 eight Knights Templar belonging to four different Encampments (as Preceptories were then called) signed a petition for a Warrant to establish a new Encampment in Dewsbury to be called Fearnley Encampment. Amongst those Knight Templar were Dr George Fearnley, the Rev. Dr Joseph Senior of Hope Encampment, No. 4, and Richard Reed Nelson of Prince Edward Encampment, No. 18. All three were active members of both the Lodge and the Chapter of the Three Grand Principles, No. 208, Dewsbury, and were primarily responsible for the establishment of an Encampment in the town.

Dr George Fearnley was a very prominent figure in Dewsbury at the time. He was the town’s first Mayor, holding the office for three years. He was universally respected and, as Deputy Grand Master of Yorkshire, West Riding, to two aristocratic figure-head Provincial Grand Masters (the Earls of Mexborough and de Gray and Ripon) he really ran the Masonic Province from Dewsbury. It was entirely appropriate that his fellow petitioners should wish the Encampment to be named Fearnley Encampment after him.

The Warrant of the Encampment was issued on the 21st October, 1859. The Encampment was consecrated on the 22nd February, 1860, and the Province of Yorkshire was consecrated immediately afterwards. Both ceremonies were performed by Sir Knight Matthew Dawes, Provincial Grand Commander of Lancashire. Dr. George Fearnley was the first Eminent Commander of the Encampment as well as the first Provincial Grand Commander. The Provincial Officers appointed were the same ones as for Fearnley Encampment, No. 39. This unusual circumstance must surely be unique.

Fearnley Encampment certainly had an auspicious start with nine new knights being installed in its first year of existence, 1860, but the success proved illusory as several of the recently recruited knights departed in 1861 (some without the formality of resignation) to join the new De Furnival Encampment in Sheffield. From this time on Fearnley Encampment struggled. Numbers were reduced, recruitment was fitful and the death of George Fearnley in 1864 came as a tremendous blow.

Throughout the rest of the 19th Century and the first decade of the 20th, the situation was fraught with difficulty, summed up vividly be V.E.Kt. Richard Gill, Provincial Prior, in his address to the Provincial Priory meeting at Dewsbury in 1929. He said “I remember with pleasure my association with Fearnley Preceptory. For close upon 30 years I have had inner knowledge of this Preceptory, having joined it in 1900 at the express wish of some of its members, all of whom are now gone. The Preceptory then only had eight members ….. To tell you of the many difficulties with which we had to contend, would take far too long .… I shall ever remember the years between 1900 and 1901 when, as each meeting came along we feared it would be the last but, encouraged by a few stalwarts, we carried on, much to the satisfaction of the present generation of knights of Fearnley Preceptory, who today have inherited what was so hardly fought for in the days to which I refer”.

V.E.Kt. Gill then went on to say that Fearnley was the parent Preceptory of both De Furnival Preceptory, Sheffield and Amphibious Preceptory, Heckmondwike.

Fearnley Preceptory held its Fiftieth Anniversary in March, 1909, and at that meeting, attended by seven members and twenty five visitors, a photograph was taken of all present which hangs outside the door of the Temple at the present time. Is it too much to hope that it could be joined by another one from this meeting a hundred years later?

After the fifty years of struggle up to 1909, the years between 1909 and 1914 saw a heartening increase of members well into double figures which have been maintained, with fluctuations throughout the succeeding century, up to the present day.

The Seventy-fifth Anniversary Meeting, in 1934, was held jointly with the Province, and was attended by sixty five knights, of whom twenty six were members of Fearnley Preceptory!

In 1936, Bro.Kt. George E. Fergusson was Eminent Preceptor of Fearnley Preceptory, and had the satisfaction of installing his brother, John, into the Preceptory. They were the father and uncle of our present Organist and Treasurer, E.Kt. James A. Fergusson.

The 1930s were a prosperous time for Fearnley Preceptory with strong support which, sadly, fell away during the war years, to increase in the post-war period, dwindled again in the nineteen-fifties to recover in the sixties to continue with average attendances in the mid-twenties to low-thirties through the Millennium to the present time.

In February, 1960, a joint “Centennial Anniversary Meeting” was held to mark the Centenaries of the Province of West Yorkshire and Fearnley Preceptory. Both were well represented, the Minutes of the first Meetings of both the Encampment and the Commandery were read in the Meeting, and hearty toasts were exchanged between the Province and the Preceptory.

In November, 1974, the Masonic Hall in Longcauseway, Dewsbury, was abandoned for the re-development of the town centre. The Preceptory moved, along with other Orders, to the Masonic Hall at Bruntcliffe, Morley, where the knights of Integrity Preceptory, No. 205, made the knights of Fearnley Preceptory warmly welcome until new premises were found and re-furbished. This was accomplished in January 1976, when the knights of Fearnley assembled in their new station at Savile House, Thornhill Lees, Dewsbury, where it has already enjoyed 33 years of steady progress.

It is traditional at Fearnley Preceptory to pass the port at the Festive Board. The port is usually donated by the recipient of some honour or appointment, to celebrate a birthday or landmark, or, of course, as a “fine” for some short-coming or lapse in the Preceptory. In the fairly recent past the knights of Fearnley Preceptory have enjoyed taking port each year with the newly installed Eminent Preceptor after his Installation, as well as, in September, 1989, with E.Kt. Roy Stewart on his appointment as Provincial Vice-Chancellor; in November, 1989, with E.Kt. John Nesbitt on becoming Provincial Sub-Prior; in April, 1994, on his Installation as Provincial Prior; and, finally, in 2002, on his promotion to Knight Grand Cross of the Temple.

The members of our fine Order present tonight may wonder why, having previously held celebrations in the past jointly with the Province, the Preceptory is celebrating its Sesqui-Centenary on its own tonight. The explanation is quite simply that we are celebrating the 150th Anniversary of the issue of our Warrant on 21st October, 1859.

The knights of Fearnley Preceptory are proud of its 150 years, and hope that it may continue to have loyal and unswerving support until its Bi-Centenary in 2059 and thereafter. Until then it is sufficient to report, as successive Eminent Preceptors did when oral reports were given at Provincial Meetings “ALL’S WELL AT FEARNLEY !”