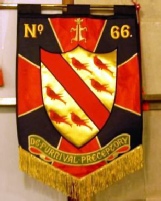 Meetings held at 6.30pm on the first Thursday in

Delivered at the 150th Anniversary meeting at Tapton Masonic Hall, Sheffield on 2nd June, 2011 by Kt. Christopher Powell in the presence of the Very High and Right Eminent Great Seneschal and the Provincial Prior.

I must first state clearly that the body of this history is not my work, but has been contributed by Eminent Knight Robert Wilkinson, Registrar of this Preceptory and a distant relative of one of its founders.

Today, we are celebrating the 150th Anniversary of the founding of this Preceptory in 1861, but there were Knights Templar in Sheffield long before then.  On 4th October 1797, there was a grand procession through the streets of this city to celebrate the opening of the General Infirmary.  A contemporary description states that after the Craft masons came the Royal Arch Companions and then came Knight Companion Witham bearing the Knight Templars’ Banner and after him came the Knight Templar Companions ‘in their aprons and sashes’.  Some of these Knights had probably been installed in Lodge No.72 – a highly successful Antients’ lodge in Sheffield in the last quarter of the 18th century.

In the Library of Hallamshire College, SRIA, in this building we are lucky enough to possess the oldest Knight Templar ritual extant in English, in what is now called the Sheffield Manuscript.  I hope some of you took the opportunity of visiting the library before this meeting and had a look at that historic document.  It is remarkable how similar that ritual is to the one we work today.

In 1791, just before that manuscript was written, Thomas Dunckerley, that great 18th-century freemason had become first Grand Master of the Most Noble and Exalted Religious and Military Order of Masonic Knights of St. John of Jerusalem.  Two years after he was installed, 1793, Dunckerley granted a warrant to Plains of Rama Encampment No.3 in Keighley 40 miles North-West of here, and later in the same year he granted a warrant to Hope Encampment No.4 at Huddersfield just 23 miles away.

However, it was not until 1860 that a Provincial Priory was established in West Yorkshire, to be followed a year later, in 1861, by this Preceptory (or Encampment as it was called until the beginning of the 20th century).

Many of the Lodges and Chapters in Sheffield adopted the names of former Lords of the Manor or prominent local land-owning families: for example we have the names Wentworth, Waltheof, Nevil Talbot, Strafford, Shrewsbury, Talbot, De Lovetot and, of course, De Furnival.  In his address to a meeting of the Provincial Priory at the Cutlers’ Hall on the 6th November 1954, the Provincial Prior – Very Eminent Knight Edward Smith – spoke as follows:

De Furnival was a great name in Sheffield. Richard, son of Henry II was the guardian of the Hallamshire heiress, Maude de Lovetot, owner of the Lordship of Sheffield.  She was married to Gerard de Furnival, a young knight from Fernefal in Normandy.  The de Furnivals were Lords of Sheffield for 180 years. Gerard joined in the Crusades and died in Jerusalem in 1219. Sir Thomas, his elder son, fell by the hands of the Saracens.  Another son, Gerard, was engaged in a further crusade and brought his brother Thomas’s body home and buried it in Worksop. The last Lord de Furnival died in 1383. In Eastrington Church are five monuments to the memory of Knights Templar, one of them a de Furnival.

The de Furnival family are to this day commemorated in a window in Sheffield Cathedral (photographs) and it is fitting that when the founder-knights met in 1861 to establish the De Furnival Encampment, they should choose a name that had a direct link to the Crusades, to the Order of Knights Templar and to Sheffield.

In 1861, seven Knights, among them Rev. Dr Joseph Senior, Past Grand Almoner, of Hope Encampment No. 4 and Joseph Rodgers, a distant relative of the present Registrar, signed a petition for a Warrant to establish the De Furnival Encampment in Sheffield, which was duly consecrated ‘according to ancient and solemn form’ at a Provincial Grand Conclave held in the Music Hall, Surrey Street, Sheffield at 2pm on 3rd May, 1861.  Sir Knight Richard Reed Nelson, Grand Hospitaller and Deputy Provincial Grand Commander, was the Consecrating Officer.

The first Eminent Commander of De Furnival was Sir Knight William White, Provincial Grand Herald, who had been made a Knight Templar in the Royal Naval Encampment No.2 in Portsmouth.  Sir Knights Henry Webster and Graham Stuart, were the Captains commanding the columns.  Webster and Stuart had been installed in the Fearnley Encampment No.39 in Dewsbury that had been founded two years before. Rev. Dr. Joseph Senior, Provincial Grand Prelate, was the Encampment’s first Prelate.  Ensor Drury, after whom one of the Craft Lodges here is named, was the first Registrar.

An account of the consecration was printed in the Freemasons’ Magazine and Masonic Mirror on 11th May, 1861.  The report ended thus:

The Encampment was then closed in solemn form with prayer and the Sir Knts. adjourned to the banquet table, congratulating themselves on the very auspicious manner in which the De Furnival Encampment had been commenced, and hoping that it would long continue to flourish, and diffuse the Christian principles of Freemasonry in the “Metropolis of Steel.” (p.376)

The first Malta ceremony was held two-and-a-half years after the founding of the Encampment, in October 1863, when nine candidates – including six of the founders – were made Knights of the Order of St John. The following Spring, three candidates were made Knights Templar and Knights of Malta at the same meeting, this being the usual practice until 1869. After this, there were no Malta meetings until 1875.  Between then and 1891 no Malta ceremony was worked, but in December of that year sixteen candidates went through, followed by the installation of three Past Eminent Commanders as Priors.

In May 1960, application was made for a Centenary Warrant and the following year, the event was celebrated on the 26th May with a splendid banquet at which the then Very High and Right Eminent Great Seneschal, Sir Eric Studd, was the principal guest. At that time the membership stood at 46.  In the last fifty years it has fluctuated, but has generally remained in the mid-thirties.

We are proud of the artefacts acquired during the life of De Furnival: none more so than the sword presented in 1937 by Sir Knight Thomas Webster. It was his father’s sword and is a fine example of the work of Andrea Ferrara, the legendary Italian swordsmith of the sixteenth century.

Over the years, many members of this Preceptory have attained high civic rank in this city.  Some have held the highest public offices: five as Lord Mayor and five as Master Cutler.  In addition, six members have been Presidents of the Chamber of Commerce, four have been Town Trustees and three were City Councillors at the time of the Centenary.

In De Furnival, we are proud of our 150-year history and of our Knights who have contributed so much to this city, to Freemasonry in general, to the Order of Knights of the Temple, and to this Preceptory.  We look forward to making our own contribution in the years to come, and, in the words I quoted earlier from 1861 the year of our consecration: ‘[may this Preceptory] long continue to flourish, and diffuse the Christian Principles of Freemasonry in the “Metropolis of Steel”’.