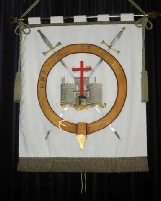 Meetings held at 6.30 pm on the second Wednesday in

February, May (Installation), September and November

History of the Preceptory – The First Fifty Years

Skipton was chosen as the potential venue for a new Preceptory in the North of the Province following informal discussions at various Preceptories around the Province and a meeting convened at Batley in the autumn of 1962 for that specific purpose.

Formal approval was subsequently given for the formation of Craven Preceptory in February 1964, with the meetings to be held in the High Street Rooms and with a Consecration planned for 23rd May.

A Warrant was duly received, and suitable arrangements were made to frame it and pass it to a Craven Companion during a visit to Olicana Chapter.   However, at the end of that meeting, the parcel containing the Warrant was not to be found.

Personal visits were subsequently made to everyone who had attended the meeting, and it was eventually found in a Companion’s wardrobe – just the day before the planned Consecration, which then took place at Hoyle Court in the presence of some ninety-nine Knights.

Preceptory furnishings were gifted by a variety of Knights, including V Em Kt Frank Harrison, who donated the Bible, and Em Kt Robert Smith, the first Preceptor.

The first Candidate, Bro Kt Matthew Pallister, was installed in September 1964, with that and subsequent meetings being held at the High Street premises but the Installation Meetings held at Hoyle Court.

A dispensation was granted in November 1972 to transfer to the new Masonic Rooms in Sackville Street, the former Temperance Hall, although the Preceptory continued to use Hoyle Court for the Installations up until 1976.

The first meeting of a Priory under the Craven banner was held in May 1975, when Bro Kt James Schofield was installed as the Prior by the Provincial Prior, V Em Kt Frank Harrison.   The Provincial Sub-Prior, Em Kt William Craven, acted as Mareschal and Bro Kt Roy Dickinson was made a Prior of the Order.

Bro Kt Philip Watkins was installed as Eminent Prior in 1976 and Bro Kt Walter Waterhouse in 1977, with some 12 Knights then also being installed in the Order, including Bro Kts Jim Gill and Bingless Smith.

A number of the Founders and Members have made major contributions to the Preceptory and the Priory over the years, including V Em Kt William Craven  and the well-known Em Kt Bert Armistead, who served as Registrar for the first 16 years.

V Em Kt Leslie Lancaster, the one surviving Founder, made it his particular duty over many years to see that the ritual and traditions were most strictly maintained.

A significant contribution was also made by the late Em Kt Jack Pailin, who was installed into the Preceptory in 1969 and as Preceptor in 1978/79.   He established our Annual ‘Night of Knights’ and enthusiastically helped to repair and modify the personal regalia of the Knights.

He maintained, re-furbished or replaced many of the furnishings, including the Altar, Banner and Standards, and also designed and made many of the Banners displayed by Preceptories throughout the Province, as well as the Provincial Banner.

Rt Em Kt John Sheridan Nesbitt, Provincial Prior from 1994 to 2002, joined the Preceptory in 1987 and was installed as Eminent Preceptor in 2004.   He presided over the 40 years celebration and is now an Honorary Member.

Craven Preceptory has been duly served over the past fifty years by some forty-six Preceptors and Craven Priory by thirty-two Priors.   The funds have been guarded by seven Treasurers and the Preceptory organized by ten Registrars.

As with many Orders, the membership is currently down a little on earlier times, but Craven Preceptory will march on into the next Fifty Years with plenty of confidence and expectation.