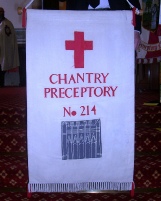 Meetings held at 6.30 pm on the third Monday in

We hear first of the Masonic Templars in the early part of the eighteenth century. Like many of the other Orders in Freemasonry, how and when the Order arose are questions with no clear and definite answer. E.Kt. John Richard Rylands, P.P.Capt.of Guards, a Past Preceptor of Chantry Preceptory, quotes the famous address of Chevalier Ramsay in Paris in 1737 as not being unconnected with the beginnings of Masonic Knight Templary:

“We desire to reunite all men of enlightened minds, gentle manners and agreeable wit, not only by a love for the fine arts, but much more by the grand principles of virtue, science and religion . . .

Our ancestors, the Crusaders gathered together from all parts of Christendom in the Holy Land, desired thus to reunite into one sole fraternity the individuals of all nations . . .

At the time of the Crusades in Palestine many princes, lords and citizens associated themselves and vowed to restore the Temple of the Christians . . .

They agreed upon several ancient signs and symbolic words drawn from the well of religion in order to recognise themselves among the heathens and Saracens . . .”

He continues by proposing that:

“. . . if the glamorous suggestions of Ramsay were not exactly true, they were at least sufficiently fascinating to justify an ostensible revival of the famous old Templar Order. I think that our present Knight Templary probably arose in France at some date between 1738 and 1750.”

The oldest Preceptories now working in West Yorkshire are Plains of Rama, No.3, under a Warrant dated 1792 and Hope Preceptory, No.4, dating from 1793. It is however quite likely that the degree of Knight Templar was worked in the Craft Lodges, especially those with Ancients warrants, long before the 1790s. There is no discovered evidence of any attempt to found a Knight Templar Preceptory in Wakefield until immediately after the Great War of 1914-1918.

As is often the case, the movement owed its success largely to the enthusiasm, energy and knowledge of one man. Frank Massie, a Civil Engineer by profession, was at that time in his heyday as a Freemason. He had served as Chairman of the Craft Provincial Charity Committee and was appointed Junior Grand Deacon in 1921. He had already reached Grand Rank in the Mark degree since 1910 and held corresponding titles in most other Masonic Orders to which he belonged.

Once the idea of founding a Preceptory in Wakefield had formed in his mind he lost no time in enlisting the support of a number of influential friends. In all he found five knights who were both qualified and enthusiastic in founding the new Preceptory – not enough to go ahead. There were, however, in Wakefield and Barnsley a number of very enthusiastic Masons who were more than happy to help out. Unfortunately, although they were all Companions of the Holy Royal Arch, none were members of the Order of the Temple. Once again, Amphibious Preceptory to the rescue!!  A series of emergency meetings were held and no fewer than thirteen Wakefield and Barnsley brethren were made Knights of the Temple in Amphibious Preceptory in 1920. The meetings were spread over three weeks and the particulars of these knights can be found in “Fifty Years History” of Amphibious written for the Jubilee of that Preceptory in 1942. The same information can be found in “The Chantry Preceptory of Knights Templar” 25th anniversary book written by E.Kt. J R Rylands in 1946.

No time was wasted in sending the Petition to Great Priory dated 20th September, 1920.  It was signed by twenty-one Knights of the Order, sixteen from Amphibious Preceptory, No.158, two from Fearnley Preceptory, No.39, and one Knight from each of Prince Edward Preceptory, No.18, de Furnival Preceptory, No.66, and the Ancient York Conclave of Redemption TI.

The Warrant was returned, signed on the day of St Luke the Evangelist (October 18th) in 1920, which enabled the Consecration to take place in the Council Chamber in Wakefield Town Hall on Saturday, 27th November, 1920. Again, full details of the Consecration can be read in “The Chantry Preceptory of Knights Templar”.

It is worth noting that there were 163 knights present at the Consecration and three candidates were balloted for at the same meeting.